I Was A Basket Case 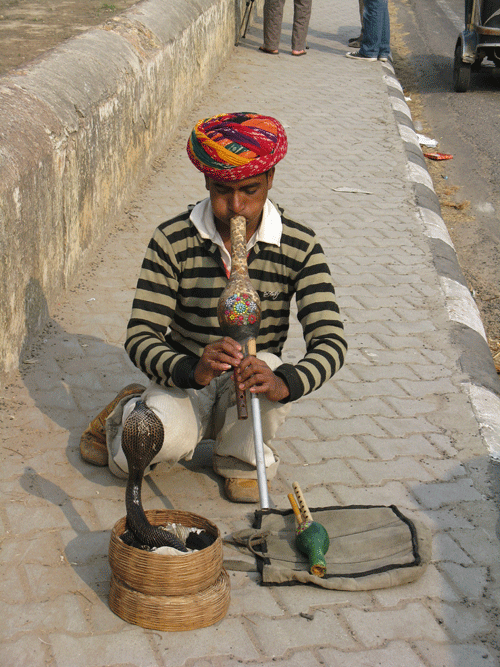 My once-in-a-lifetime Silversea Cruise from Dubai to the Seychelle Islands included stops in India. I was fortunate to take a mid-voyage land adventure to the Number One place on my bucket list: the Taj Mahal. We left the ship, the Silver Wind, in Mumbai and re-embarked three days later in Cochin, a surprisingly beautiful seaside city on the Arabian Sea. But what I was truly hoping to encounter was a snake-charmer.

I had seen the Indiana Jones movie, so I surely expected my sighting to take place in one of the crowded open-air bazaars we visited. I scanned far and wide for the movie version of the performer — an ancient, white-bearded, barefoot grandpa in turban and robes, seemingly oblivious to the gawking tourists, yet centrally positioned for maximum tip-collecting opportunities. But alas, he was nowhere to be seen in the markets of Mumbai. He materialized instead in a sophisticated New Delhi business district in the form of a clean-shaven teenager in a designer polo shirt, plopped down in the middle of a sidewalk, across the street from our luxury hotel.

At first, only the soft tones of the flute could be heard, coming from somewhere near the bustling intersection. As our Silverseas Cruise tour guide led us down the street, we practically trampled over the boy. I could only be thankful that no one actually stepped on the snake! Naturally we stopped and watched. It was mesmerizing. Suddenly the taxis, the buses, the chatter of people on cell phones disappeared and there was only the music and the cobra.

As the music rose, so did the snake, lifting itself up out of the basket, dropping back down, swaying back and forth as if following the eyes of the young snake-charmer. It was a ballet and we were the audience. It was mystical and sensual. It was exactly the experience I had imagined it would be.

The melody concluded, the cobra fell softly back into the basket and the young man closed the lid. Then he flipped open the lid of a second basket beside him and looked up at us with a big grin. We all knew what he wanted and were happy to oblige. It was a performance well worth a few coins each, and a remarkable addition to our Silversea Cruise experience.

We turned to continue on our way, quietly, all of us still in the moment and in awe of the experience, when the snake-charmer pulled off his turban and hollered in only slightly accented English, “Hey! Thanks, guys!”