The Seven Wonders of the World. Chapter 1 – The Great Wall of China 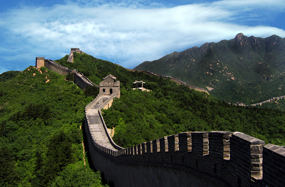 So you missed seeing six of the fabled Seven Wonders of the Ancient World (you can still visit the Great Pyramids of Giza in Egypt). Sadly, though, legendary sites such as the Hanging Gardens of Babylon and the Colossus of Rhodes are no more.

In 2001, an organization called New7Wonders (www.n7w.com), based in Zurich, Switzerland, began an initiative to name a new group of 7 wonders. Two hundred finalists were chosen and people across the globe were invited to vote by phone and internet. The winners were announced at a star-studded gala ceremony in Lisbon on July 7, 2007 (7/7/07 – get it?).

The sites are well known and in this age of global travel, highly accessible. Wouldn’t you love to be able to say that you’ve seen the 7 Wonders of the world? Key Traveler would love to help you get there. Here are the New 7 Wonders of the World (in no particular order), as voted by over 100 million people worldwide.

As one might expect, the Great Wall of China’s main purpose was to protect the Chinese Empire from invaders intent on war and conquest. Work began on what ultimately became known as the Great Wall began as early as 7th century BC, with mud walls being erected along certain routes and provincial borders. Over the centuries many walls were combined and fortified to create stronger defenses. In the 14th century, Ming Dynasty rulers decided the wall could be reinforced and extended to create a national border protection against invading Mongols from the north. In some important governmental areas, such as Beijing, the wall was further strengthened with bricks and stones. It is not clear exactly how long the structure was during this time, but history tells us that it served its purpose for a while. Mongols, and later Manchus, were unable to enter China until the mid-1600s, finally toppling the Ming Dynasty.

In 2009 a technologically modern survey of the length of the wall was undertaken by researchers. A definitive answer appears impossible since the wall and its components veer in various directions, and some sections have disappeared completely due to erosion and other damage. The consensus seems to be that the total length of the components spans approximately 5,500 miles, including hundreds of miles of natural barriers. So how much of the Great Wall can a traveler expect to see on a typical vacation trip to China? Definitely not the entire length. That would be like walking from Atlanta to Honolulu!

There are a few sections of the wall that are within a few hours by car from Beijing, therefore are very well-visited. Because of the tourism, they are in better repair than more remote sections. Ocean and river cruises that call in Beijing offer shore excursion opportunities to these areas. For example, Oceania’s “Empires and Dynasties,” a 17-day cruise from Hong Kong, overnights in Beijing, giving guests ample time to visit one or more of the Great Wall sections. Avalon Waterways Yangtze River cruises between Beijing and Shanghai always include an excursion to the Great Wall. And of course, escorted tour companies such as Tauck offer a multitude of choices for seeing the Wall in China.

The Badaling segment, only about a 1-hour drive from Beijing, is the most-visited section of the Wall and clearly has been fitted to cater to a large number of tourists. Walking the wall, one sees printed signs, handrails, lights, even a cable car for visitors with mobility difficulties. This section traverses a beautiful area with awesome vistas, and is a good representation of what the wall might have looked like centuries ago. As a destination, it offers a movie theater, an informational Great Wall Experience, a museum, shopping and dining.

With 22 iconic watchtowers along the wall, a gentler slope and gorgeous mountain panoramas, the Mutianyu section is also a popular stop on any Great Wall tour. Yet because it is a 2-½ hour drive from Beijing, many cruise guests pass it by. Lucky visitors can walk along the longest restored stretch of the Wall in all of China, without the distractions of tourist traps and huge crowds.

Shanhaiguan (Shanhai Pass) is the spot where the eastern end of the Great Wall literally meets the Pacific Ocean. The ancient military fortress that juts into the ocean, known as “Old Dragon’s Head” is part of the tourist complex in the Shanhaiguan Wall area that also includes mountains, lakes and a temple.

Also an easy distance from Beijing is the Huanghuacheng section. This is in a lovely lake area, with gardens, beautiful views and a well-preserved ancient castle to walk through. Most striking, perhaps, is that this section of the wall is by far one of the steepest. Climbing the steps you feel as if you’re walking up into the clouds.

Of course there are many sections of the wall in the farther reaches of China. But if you’ve been to any or all of them, you can honestly say you’ve been to one of the Seven Wonders of the World.

Stay tuned for more Wonders of the World articles.